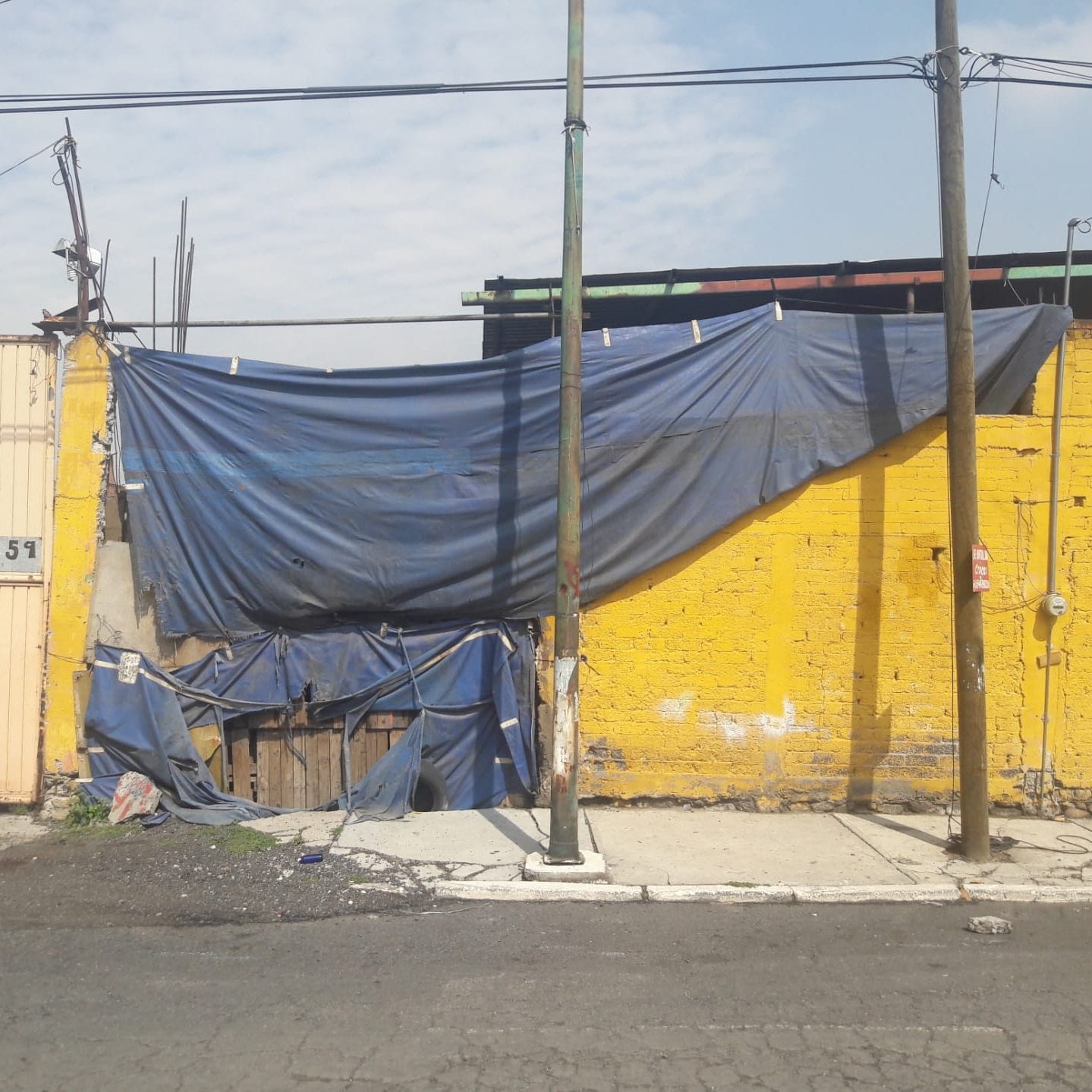 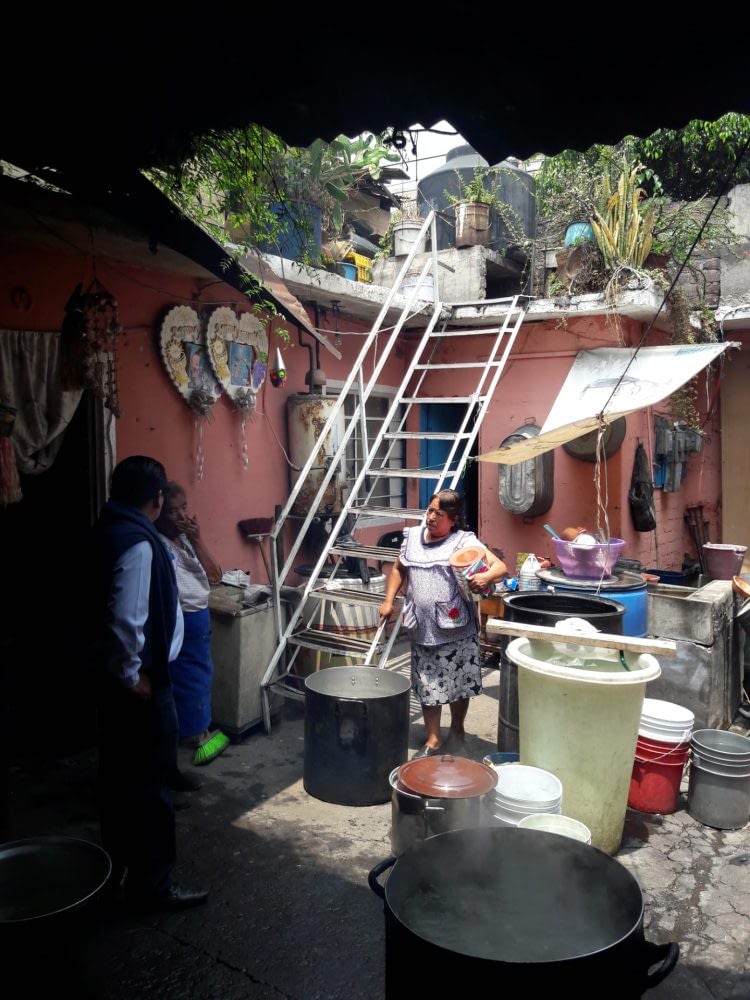 Technical support for the development of a methodological guide to small Mexican municipalities for strategic post-earthquake urban planning. Based on  the identification of relevant case studies in Latin America and similar contexts, the guidance document developed includes methodological steps for efficient municipal planning in post-disaster contexts and effective tools for diagnostic and identification of priority areas. 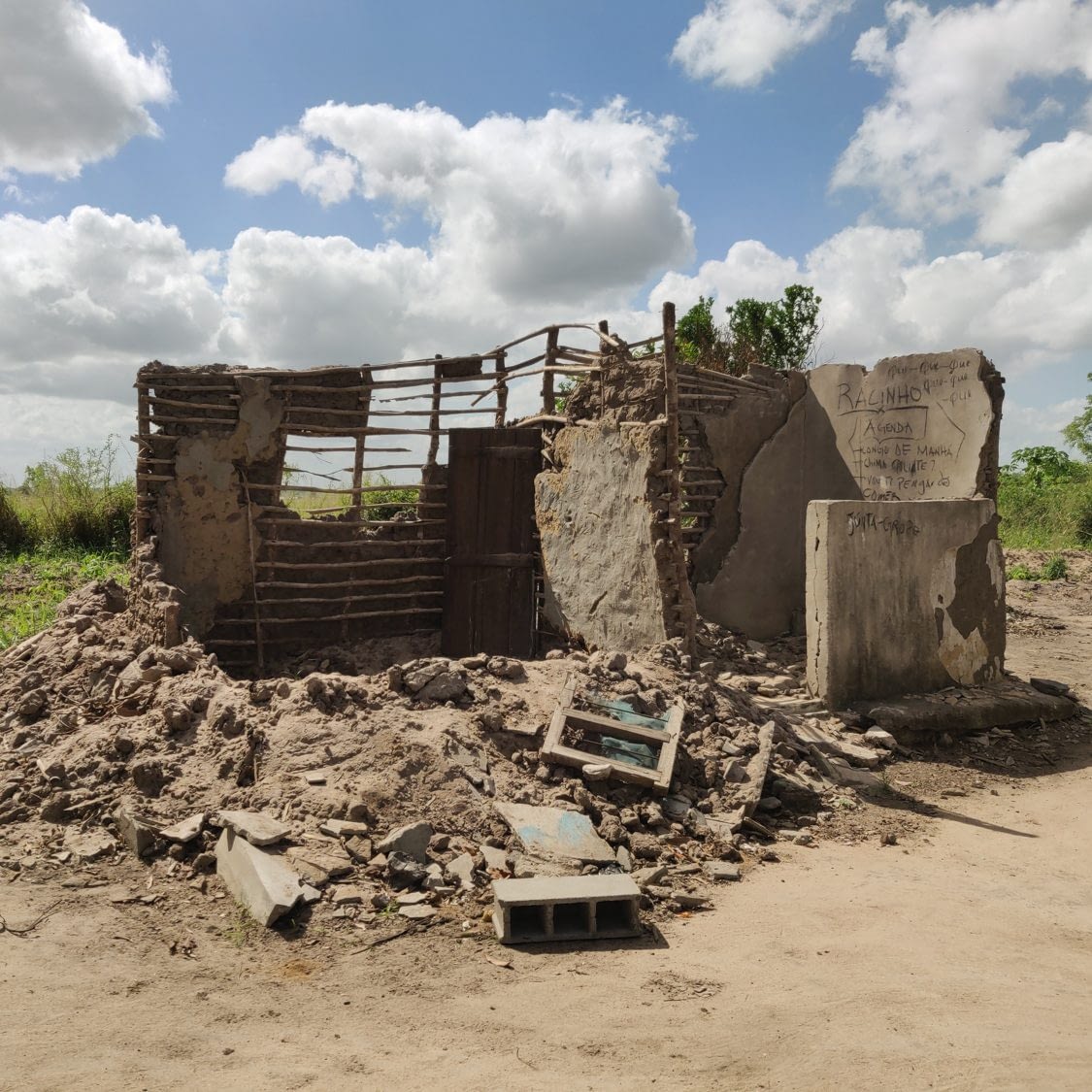 Study on the post-cyclone urban context in Beira, Mozambique - 2019 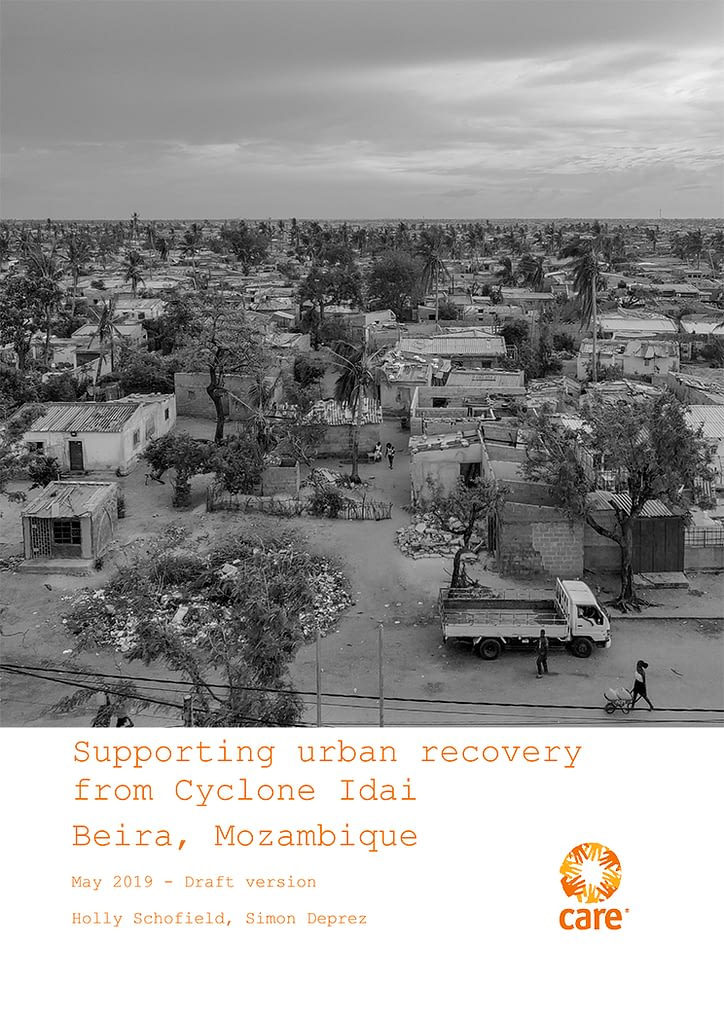 Study on the post-cyclone urban context with the objectives to understand the impact of Cyclone Idai on urban households and communities as well as their shelter coping and self-recovery processes; and provide recommendations to inform the Shelter Cluster response strategy, CARE Mozambique and the COSACA consortium’s shelter response.

Study available on the Reliefweb and the Urban response portals 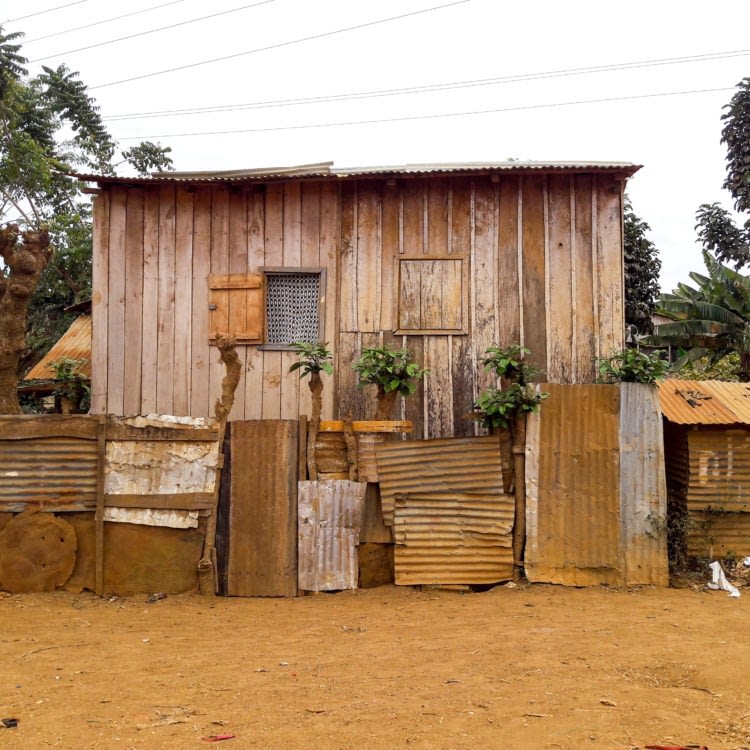 Final Evaluation of a Urban Resilience program in Lusophone Africa 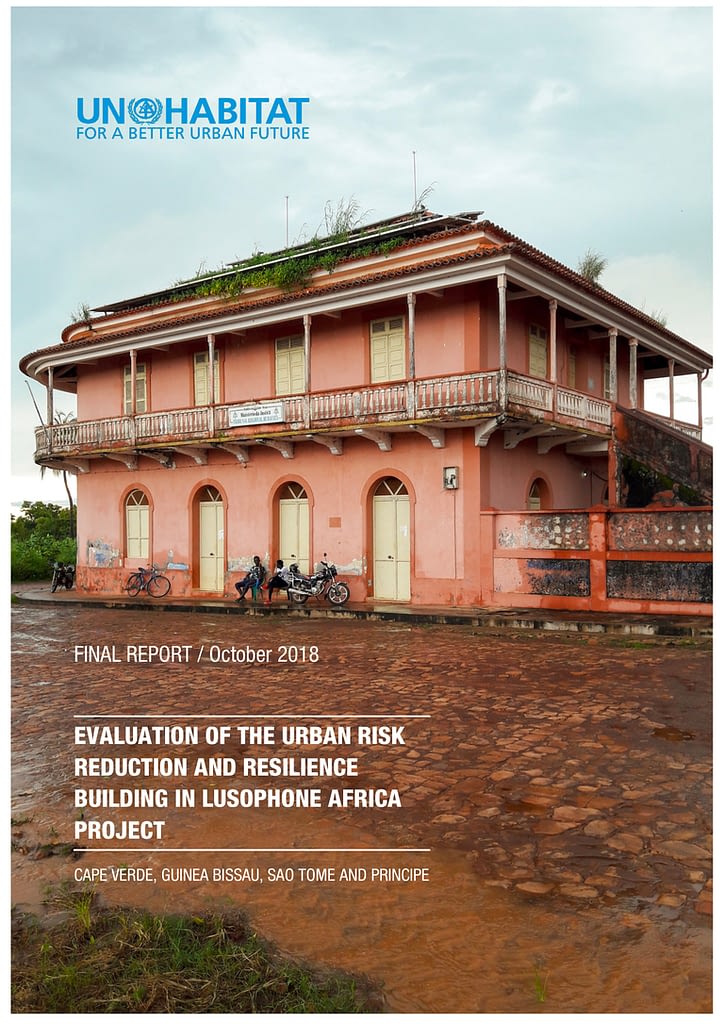 Evaluation of the Urban Risk Reduction and Resilience Building in Lusophone Africa Project:
Assessment of the achievement of expected accomplishments and performance of the project in increasing technical understanding and knowledge of municipal authorities, and enhanced communication and information exchange between cities and towns in project cities. 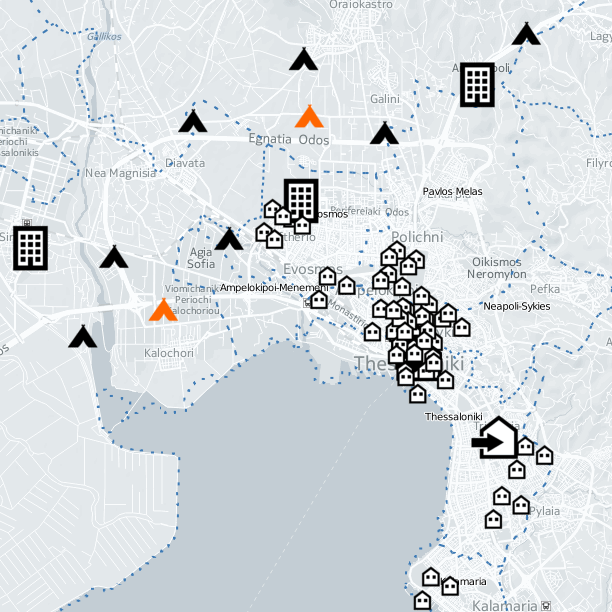 This study responds to NRC’s request to review possible housing alternatives to camps in Thessaloniki and its surrounding region (Greece). The report is divided into three parts: a context analysis, an urban study and study of the housing market, and recommendations for implementing the “urban housing” component of the NRC project.

The context analysis first highlights the lack of data and information available on the refugee population in Greece, about 13,000 of whom live in camps in the northern regions of the country. These unknowns are consequently hampering international aid organizations’ efforts to move refugees out of the camps and into alternative accommodation. Furthermore, this housing solution itself remains a short-term response that currently mainly focuses on those applying for relocation to Europe, who are predominantly fully-registered refugees.

The urban study of Thessaloniki reveals a city in crisis. As in the rest of the country, Thessaloniki has been deeply marked by the recession triggered by the 2009 economic crisis and by the austerity measures imposed by the EU that followed. At the urban level, the housing and construction market has been paralyzed , and the development of certain areas of the city has ground to a halt. Yet Thessaloniki remains a relatively mixed city without great social fragmentation that, throughout history, has managed to accommodate several major waves of migration.

The study of different neighborhoods reveals the demographic dynamism of the city’s vast suburbs that contain relatively new housing stock (30% of the total stock built between 1980 and 1995), which is primarily intended for sale (Evosmos, Thermi). The various maps presented in this study provide information on individual neighborhoods, including data on housing. The study also include an interactive map showing the density of urban services within the metropolitan area and in secondary cities. Combining this data reveals a number of potential locations in which to rehouse refugees. 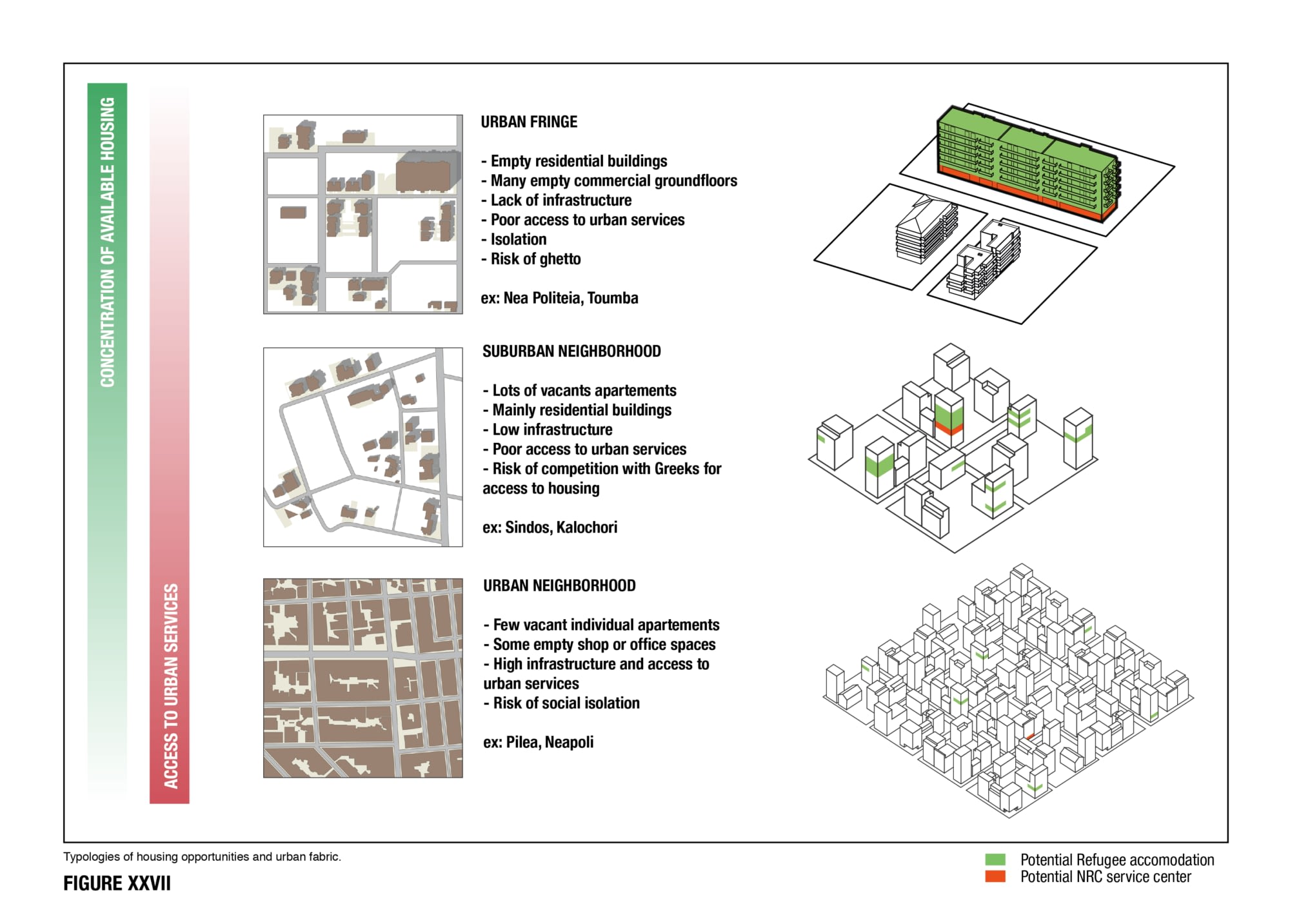 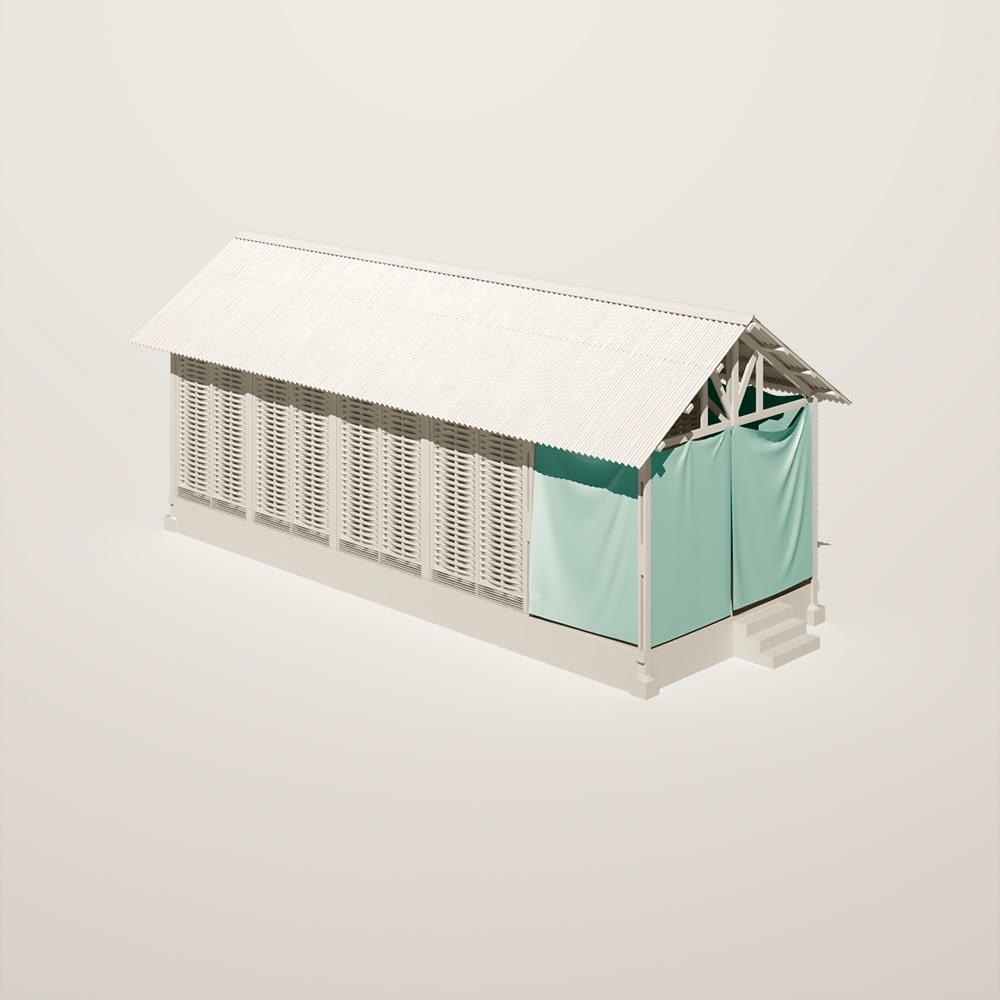 Long Term Impact Evaluation of a T-Shelters Project in Haiti

Five years after their construction, this evaluation has reviewed three main areas of the 1050 T-Shelters project: current shelters and school use and conditions; T-shelter modifications and durability; the long-term impacts for beneficiaries and communities.

One of the main findings to emerge from our fieldwork is that 80% of the 206 T-shelters visited are still being lived in by their original occupants on their initial site, with this situation being more common among landowners and usufruct beneficiaries than among tenants. A second key finding is that 77% of the T-shelters show no signs of major damage. Modifications to the T-shelter are common as few shelters visited are still as originally built.

The project has had significant long-term positive impacts on the beneficiaries as, five years after their construction, the vast majority of the T-shelters are still guaranteeing the physical security of people and their belongings and are continuing to provide security of tenure.

This evaluation analyzed the project’s two complementary strategies. First, the shelter kits distributed to help rehabilitate tents in informal settlements and that aimed to provide vulnerable families with the tools and materials necessary to improve their dwellings. The kits are designed to enable households to make the required modifications to their shelters themselves. Second, the rehabilitation of sub-standard housing, such as garages, stores or apartments in unfinished buildings, the aim of which was to reduce families’ exposure to the elements and improve privacy. The rehabilitation work is carried out by hired contractors working in the private sector.

At the moment, hopes for a short to medium-term solution to this crisis have all but disappeared; people have been fleeing from conflict-affected areas within Syria and their resources are much reduced. The Lebanese government has consistently refused to set up formal refugee camps and, as a result, the refugee population is widely dispersed and partly settled in urban or semi-urban areas. 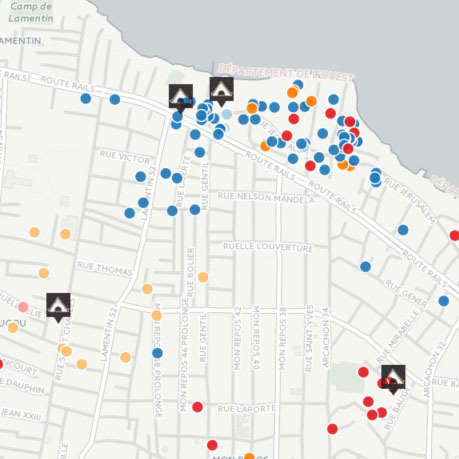 Evaluation of CARE "Retrofit" approach for IDP resettlement in Haiti

“CARE’s retrofit program has been empowering camp residents to find housing alternatives since 2012. A family living in a camp finds a homeowner whose house is damaged. In exchange for financial and technical assistance to repair their houses, homeowners agree to host the family rent-free for 12 to 24 months. Homeowners manage the project, which provides structural repairs through a technique called retrofit. They purchase materials locally and hire local workers, contributing to the neighborhood economy. CARE’s engineers train the workers, inspect materials and supervise the work.” Extract from the CARE Five-Year Progress Report

Final evaluation of the CARITAS construction program of 540 houses in Cabaret, Haiti

This evaluation focused on the project implemented by Caritas Switzerland to rehabilitate 540 permanent houses in the town of Cabaret, which is in the 11th communal section of Leogane, Haiti. The project was implemented in two phases, the first of which took place between October 2011 and March 2013, and the second between April 2013 and April 2015. An additional exit strategy phase was in place until November 2015.

The project target area was the village of Cabaret, which has about 730 households. It is located in a rural area about 10 kilometers from the center of the city of Leogane. Cabaret is near the epicenter of the 2010 earthquake and 75% of the village’s houses were destroyed or severely affected.

The aim of the project was to achieve the following three outcomes:

1. The sustainable development of housing has improved the safety and physical and mental well-being of the project beneficiaries;

2. The capacity and knowledge of members of the local community to build earthquake-resistant and para-cyclonic buildings have been improved;

A participatory process in a Port-au-Prince neighborhood

This assignment consisted of an urban diagnosis and participatory planning in the neighborhood of Christ-Roi, Port-au-Prince, Haiti, for the NGO Solidarités International. For 4 months, a team of planners, architects, sociologists, anthropologists and social mobilizers assisted 100 people to develop an urban neighborhood improvement strategy. The results were presented to the mayor and formed the basis of an urban renewal project.

The process was divided into four phases: a festive launch, with traditional brass bands that involved people walking through the neighborhood thus enabling them to cross certain “invisible barriers”; a diagnostic phase that included generating thematic maps (water and sanitation, services, leisure and culture, waste, environment, road conditions, etc.); a rehabilitation strategies definition phase; and, lastly, a phase in which the final document was presented to city officials.

The participatory mapping exercises were all progressive. The phase began with training sessions on map reading and awareness-raising on the importance of such tools, at the same time as promoting local knowledge and grassroots map production. After several weeks, the inhabitants had gained confidence in their knowledge and learned about spatial representation. At the end of the process, they were able to hold complex discussions with the team on integrated urban strategies, aware of their neighborhood’s challenges and opportunities. 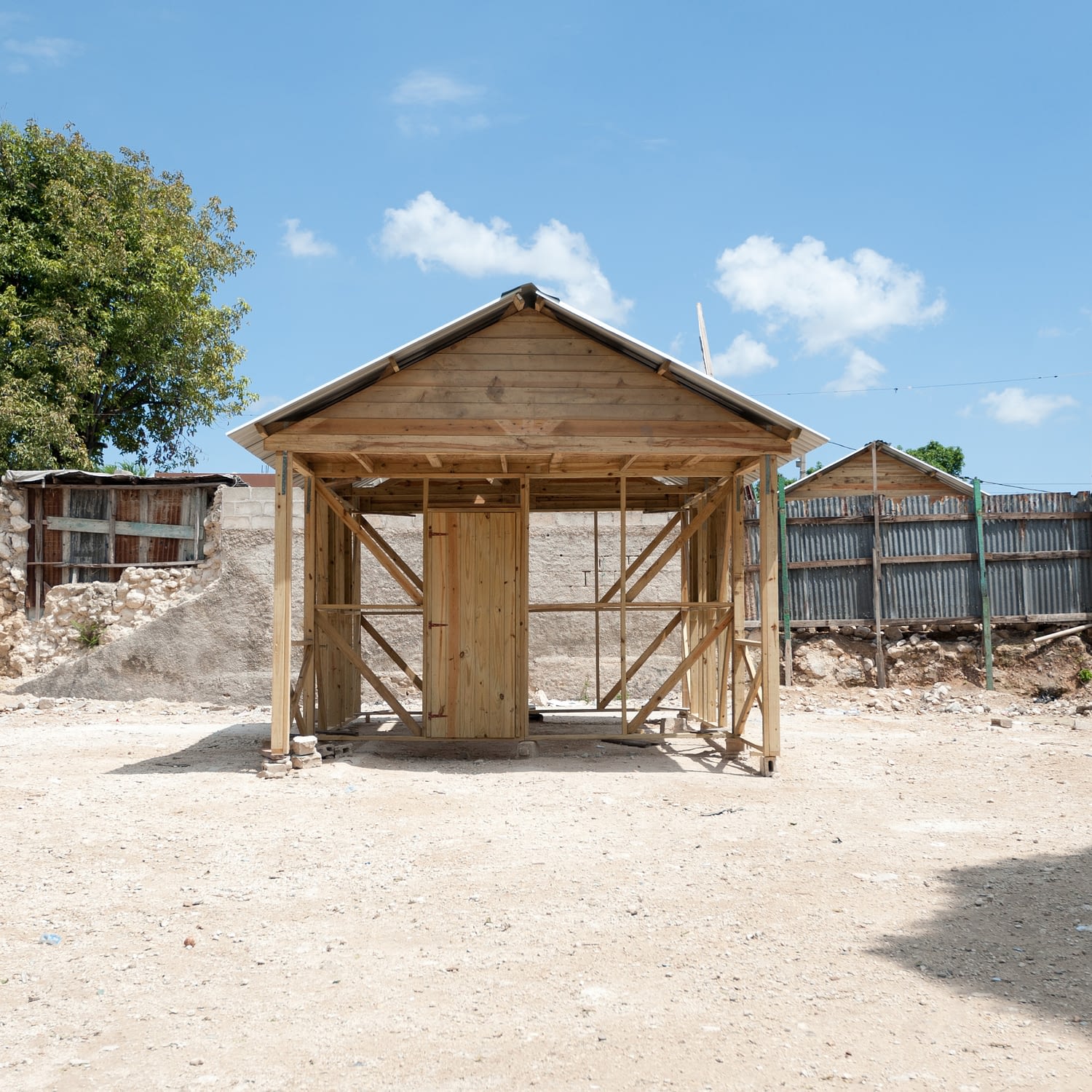 Analysis of the humanitarian response to the 2010 Haiti earthquake

This study seeks to clarify the reconstruction environment by focusing on the urban context and analyzing some of the major issues specific to Port-au-Prince (land, housing, risks, etc.), as well as by presenting some of the main stakeholders’ strategies and by reviewing the national strategy outlined in 2011. The aim was to enable Solidarités International to more effectively define the scope of its activities in line with its goals, know-how and expertise.

Ever since the area was first settled, Port-au-Prince has been continuously rebuilt. At the same time, urban sprawl has increased during each crisis, with urban population growth being linked to the country’s regular hurricanes, earthquakes and political changes. Successive political crises have also played their part by generating a continuous and massive rural exodus, leading to the gradual impoverishment of provinces and strengthening the attraction of the capital.

In 2010, the earthquake on the 12th of January was the latest crisis to hit the city, leaving chaos in its wake: a large part of the city was destroyed, 230,000 people died and 1.5 million were displaced. This report analyzes the various issues related to the reconstruction of the city of Port-au-Prince, the main challenges encountered and some of the urban intervention strategies introduced, particularly those implemented in informal settlements.